In PE this term we're doing gymnastics. Starting off with balance.

Megaball, our Christmas performance, was a triumph.

Having fun on the school trip to Cambridge

On Tuesday, Hazel Class joined forces with children from Cedar and Lime on a Stick Walk.

Hazel Class joined the rest of KS2 in the hall to enjoy the performance poetry of Justin Coe.

A wonderful day spent at the Botanical Gardens in Cambridge.

Great Day at the Apex today. Hazel Class were beautifully behaved and performed wonderfully. Very proud of them all.

We've been learning and performing poetry. 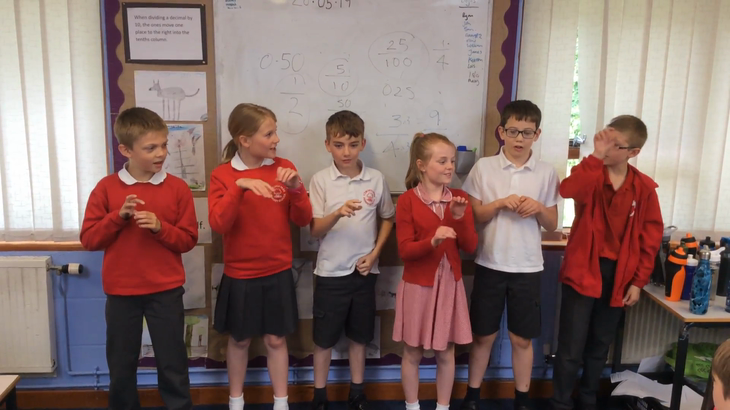 Hunting for invertebrates in the school grounds this morning.

A few more pictures from our day at Ickworth at the end of last term.

Brainstorming what we know about climate change.

The water cycle (one of the things we've looked at in Science) can be recreated by planting cress in a plastic container with cling film over the top.

Having fun (yes fun) with fractions.

Hazel and Lime Classes had a great day across the road at the park. We classified leaves, spotted and drew wild flowers, completed a National Trust Nature Trail and built mini dens.

Hazel Class practising our dance routine based on The Iron Man by Ted Hughes.

Hazel Class performing their adaptations of the Goldilocks story as a play script. The children came up with some very interesting variations including pirates, giant marshmallows and baby dolphins.

Some more pictures from yesterday's Forest Schools trip for Hazel Class. Thanks to all parent helpers that came along on the day. We hope you enjoyed it almost as much as we all did.

Hazel Class had a fantastic time at Charlotte's Wood Forest School. We went on a scavenger hunt, climbed trees, built dens and toasted marshmallows around a camp fire. Some of us got a bit muddy too! 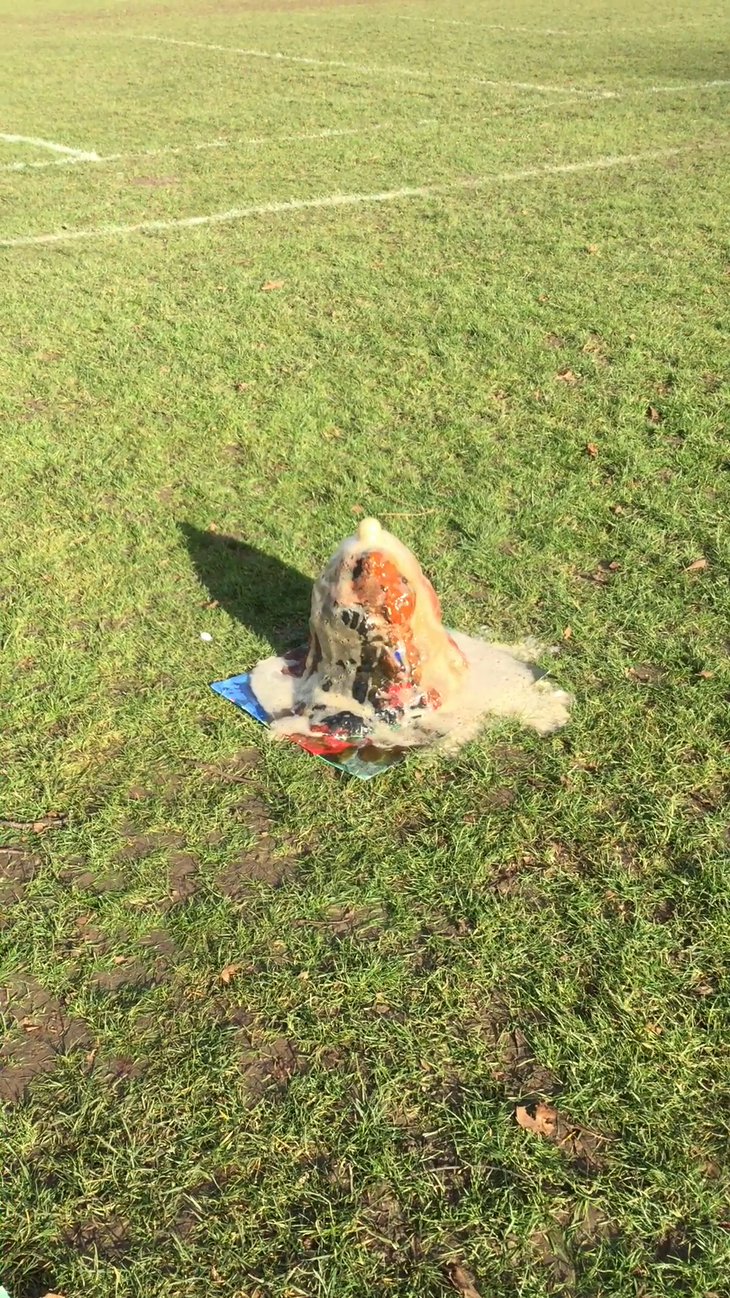 Enjoying some library time on a Friday afternoon.

ICT - The children learnt how a stop-motion film is made and began to make their own using a webcam. 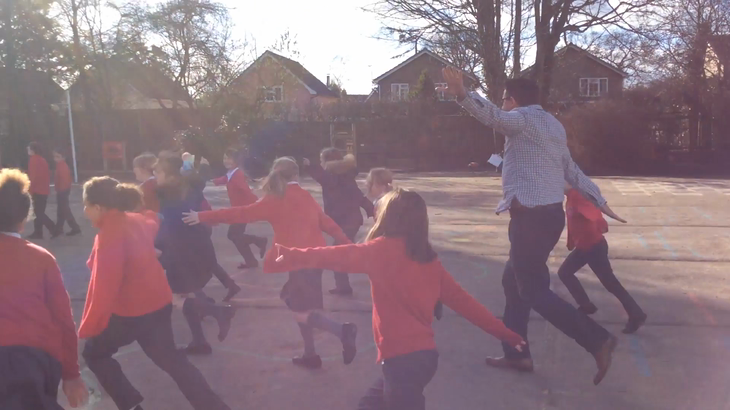 While reading our class book, 'The Imaginary', one of the things we've been talking about is the things it's seen as normal to do as a child, but not as an adult. Running around being an aeroplane being one of them. Which of the people in this short clip, looks the most out of place?

This week we've been painting our volocanoes

Yesterday we made Play Doh models of the earth's different layers. Today we began to made our volcano models.

We may have made some paper chains after the dress rehearsal today.

We've been rehearsing for the Christmas performance of 'Bah Humbug!'.

Elfeneezer Scrooge joined our class today. He'll be with us up until the holidays.

The children have been learning how to create their own question and quiz game using algorithms on Scratch 2. During this lesson, the children finished editing their Sprite characters using  effects, costume and size commands and blocks.

In Science, our new topic is sound. We used string and metal forks to show how well sound travels through a solid compared to a gas (the air).

We've been look at the art of Andy Goldsworthy. Today we used his style to create our own work.

We made a human number line to show our understanding of place value.

On Friday last week, Hazel Class went on a stick walk in Ickworth Park. It was a great way of getting to know each other we have produced maps of our walk, as well as coming back with resources that we'll use in Art, PSHE, English and Science over the course of the term.

As part of child safety week we had a visit from the local fireman. We had a fire safety talk, looked at the uniform they wear and a question answer session which involved Mrs Asker get dressed up in the uniform. We got to have a closer look at the fire engine and we were all able to have a go at using the water hose!

Today, we had a visit from Abbeycroft Leisure to talk about the importance of water safety and how to always following the SAFE code -

Spot - spot the dangers whenever you're near water

Advice - take advice, read the signs, ask a lifeguard or adult for help

Friend - always go with a friend or family, its more fun, and they can help in an emergency

Emergency - know what to do in an emergency

We have been using a program called Flowal in ICT to create flow charts.

Pupils from King Edward's in came in to school recently lead a morning of fun maths activities.

People from the Theatre Royal came. They took us to Somewhere and we found Something which came from Nowhere.

We've been measuring how far our paper planes fly in Maths.

Making parachutes to help us understand how we can slow down objects feeling the force of gravity.

In Science, picking up oily jelly with chopsticks proved tricky and taught us about friction, or in this case, lack of it.

Our Stone Age art work paid off as we managed to produce some wonderful painting and necklaces to make this display.

The 2017/18 Hazel Class went stone age this week. We made made charcoal and crushed blackberries into paint using flint, then did our own cave painting using feathers. We also made necklaces from clay, shells and bones.

Hazel Class designed their own Fairytale mushrooms, then made them out of clay. Next we will be painting them and telling their own story orally to the class.

Hazel Class enjoyed the school trip to Shimpling Hall. We fed sheep and chickens, identified different crops and stood in the giant shadow of an enormous combine harvester.

We used a variety of methods to measure the athletics track. It was suprising how similar some of the results were.

We conducted an experiment to show how the digestive sysem works. Or made poo, depending on your point of view.

During SATS weeek we moved into the hall and took advantage of the extra space when learning about Roman numerals.

This term the Victorian era is out Topic subject. We had a look at some traditional toys.

It took a few attempts, but finally our volcano erupted. 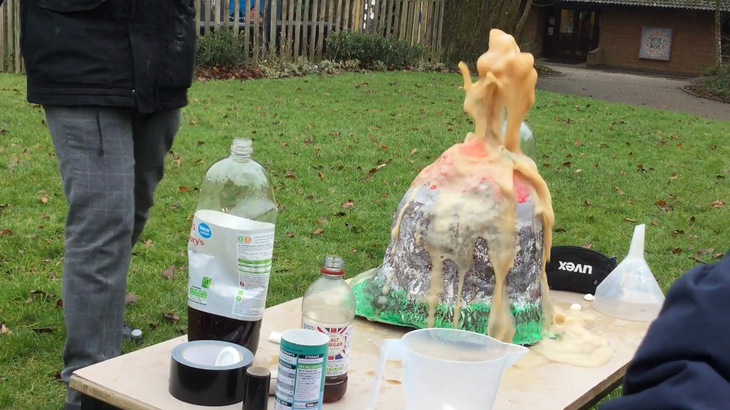 A Kazoo makes a 'Sound', we made some and then recorded ourselves. 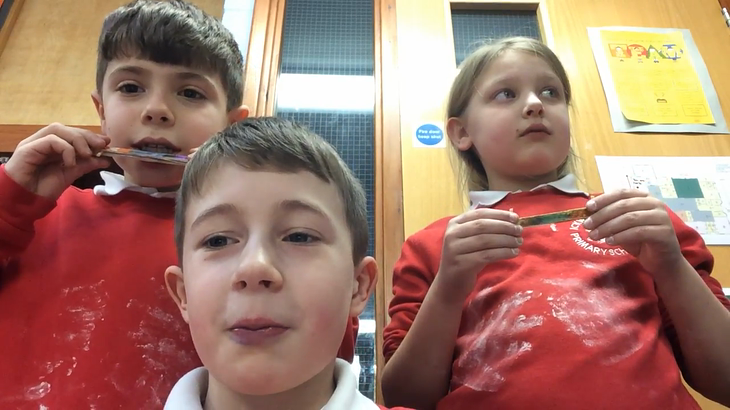 In Science, as we are studying Sound, we have been making a lot of it (some might call it noise, we call this music).

We have started making our own volcanoes . It was a messy business but great fun.

We've been studying different aspects of sound. Amber brought her cornet in and played for us.

In Topic we have been studying volcanoes. Our display is looking pretty good. Since this photo was taken we have added labels.

There was terrible news yesterday as Hazel Class discovered its Christmas Elf, Elfis, had gone missing and a police investigation was underway.

We hope you enjoyed the Lower Key Stage 2 performance of Cinderella and Rockerfella. The children worked incredibly hard and put on a fantastic show.

Well done Harrie Bream! Your picture will be the cover of the Christmas play programme. We're looking forward to seeing you all there!

What a Shocker! Well, not really.

Last week Hettie's dad, Mr Jones, came to visit Hazel Class to tell us about the journey that electricity takes from source to our homes. Mr Jones works for an electricity supplier and shared with us loads of great facts and information as well as some really interesting objects like a huge fuse and some of the clothes he wears to protect himself when he goes to work. Samuel and Amy got to try them on but we decided not to field test them ourselves this time around.

For maths homework this week we are asking every member of Hazel class to learn one of the 3,4,6 or 8 times tables off by heart. All children have been given their own laminated sheet with all times tables on for them to learn at home. We have asked the children to choose one of the four tables above and learn to recite them by the end of this week (25th November). All the maths work we have done so far this term is made easier by instant recall of  key times tables and the National Curriculum requires all year four pupils to know them thoroughly (up to ten times tables) by the end of the school year. We will obviously be working hard on these in class but would also greatly appreciate parents support with this whenever possible.

On 31stOctober , Hazel Class joined the rest of Key Stage Two on a trip to Colchester Castle.  We have been studying Romans this term and the visit was of particular interest to us.  The castle vaults are where the Romans that occupied Colchester took refuge when, leader of the Iceni tribe Boudica, stormed the city after being betrayed by the Emperor Nero. The castle was built on top of what was left of a great temple built by Nero’s predecessor Claudius.

We began the day with an activity with the children in groups building and then dismantling a Roman Villa and a Celtic Roundhouse. It was tremendous to see how the children worked together in teams and solved the challenge with only a little prompting from adults present.

After  lunch,  we visited the vaults, climbing down a narrow, steep, stone, staircase and in doing so stepping back over 2000 years. The children were told more of the history of the Roman occupation of Colchester,  examined weapons used by Romans and Celts and heard in gory detail how Boudica vented her anger on the city. It was strange but exciting to be sitting surrounded by the very walls where the Romans sat in fear as she unleashed her ferocious forces.

Finally, we visited the museum, packed with Celtic and Roman artefacts such as coins, vases, weapons and even the skulls of two Celts that had been brutally killed by the Roman invaders (you could still see the marks where they had been hacked at by Roman swords!

We managed to pack a lot in, the children had fun while learning and being inspired by what they saw, heard and touched. We even managed to get back to school on time!